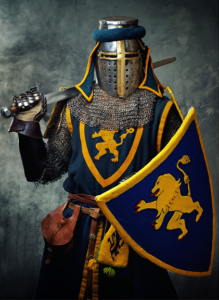 Ever noticed the colorful decoration that knights had on their shields and as part of their clothing in the Middle Ages?

The history of heraldry is a fascinating one, and it’s been around for much longer than you might think. In fact, there was a time when the only way to tell who someone was on the battlefield was by this decoration, formally known as a coat of arms. The elements composing a full coat of arms, called an achievement of arms, derive from the equipment of a medieval knight.

This tradition began in the 12th century AD as an easy way to identify medieval kings and princes who were otherwise unrecognizable beneath their armor. This way, when an opponent saw Richard I’s three leopards or the Black Prince’s black shield, they would quake in fear before a battle with knowing what mighty warrior was behind the suit of armor.

Over time, heraldry evolved into something much more than just a way to differentiate people from each other. It became an art form that was used in every occasion where someone wanted to show their heritage or status. The tradition of using coats of arms is still alive today, and the symbolism of heraldry remains a common sight from company logos to sports teams’ badges. Arms that have been passed down through the generations are now a great way to connect with our past.

The practice of wearing family crests and arms began to spread among nobles and knights in the 12th century AD. Lions, eagles, crosses, and geometric shapes were common symbols on shields and surcoats (a long sleeveless gown tied at the waist and worn over armor). As more knights utilized coats of arms to distinguish themselves, the coat of arms had to get more sophisticated in order to differentiate them from one another. 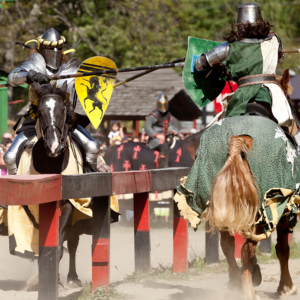 So what about the people that weren’t a part of nobility or courageous medieval knights? By the mid-13th century, coats of arms had been adopted by priests, cities, town commoners, peasants, and burghers (privileged citizens of medieval towns in early modern Europe), who often used them as seals or other insignia. In the 14th century, even some peasants took to using arms. Heraldry, the study of family arms, had now been fully established as a social science with its own language, history, regulations, and social classes.

Did you know that heraldry was formerly known as armory (in Old French, armoirie) during the Middle Ages? The term “heraldry” derived from the heralds, those officials who recorded the armorial bearings. In medieval tournaments, a large number of knights took part in mock cavalry battles or jousted against each other. It was the heralds’ duty to announce the arrival of a tournament, describe the rules under which they would be held, and pass on challenges offered by one knight to another.

It was the responsibility of the heralds to keep track of all the coats of arms and be able to identify which arms belonged to which person by recording them in a ‘roll of arms’, a collection of coats of arms. The oldest known English roll of arms is from around 1244 AD. Yes, you read that right. It is a single sheet painted on both sides by Mathew Paris, depicting 75 coats of arms beginning with the king’s. The roll can be found in the British Library today.

Heralds also functioned as messengers and were granted safe passage during times of war. Eventually, they became involved in important events such as weddings and funerals for royalty and nobility. The reputation of heralds rose steadily throughout the 14th century AD when rulers recognized that heralds, with their extensive knowledge, could be valuable sources of information on whom they were fighting.

From the 15th century, heralds and apprentice heralds (pursuivants) worked in colleges of arms, institutions that deal with matters of heraldry. Such institutions helped to sort out the confusion which had arisen from anybody creating their own coat of arms. To help with this, they created a series of specific rules and customs of heraldry, and they accumulated detailed records of all the arms that had ever been created in their jurisdiction.

The medieval era was the birthplace of heraldry, which began as individual warriors – first kings and then knights – tried to identify themselves to their opponents by displaying their coats of arms. The next stage was for sons to reuse the arms of their fathers, and so the notion of a hereditary symbol evolved, with boys and even daughters being allowed to inherit their parents’ arms. The earliest known instance of a coat of arms being passed down from one generation to the next is that of Geoffrey, Count of Anjou (d. 1151 AD), and his grandson William Longespée (‘Longsword’, d. 1226 AD), who both have six lions rampant on the carved shield on their tombs.

What did early coat of arms designs look like? 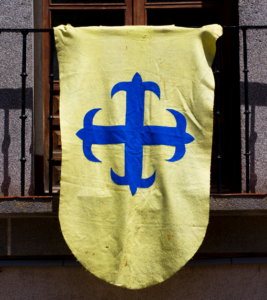 The first symbols of identification on coats of arms did not need to be overly complicated; simplicity and audacity made them all the more apparent on the field. Of course, the shield was the most visible and obvious location to carry identification, which might have only one color or two colors separated by a horizontal, vertical, or diagonal line. Then, as more and more knights adopted the practice, arms began to appear with new designs and shapes, (some of which you may already be familiar with) to keep their purpose of identification. As a result, not only colors but also symbols were used. Lions, weapons, flowers, crosses, and stars were all popular choices.

In addition to that, the arms of burghers bore a far wider variety of charges than the arms of nobility like everyday objects and tools. House marks are another type of charge usually only used in burgher’s arms. These symbols were sometimes stylized to make them more recognizable from a distance while still fitting within the odd shape of a shield. Furthermore, some colors weren’t combined because doing so made the shield difficult to identify (e.g. black on purple and vice-versa). 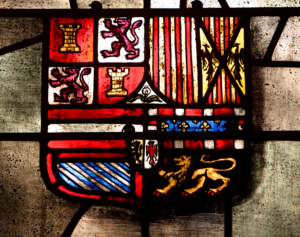 The next stage was to combine these designs with different colors to create a unique combination. For example, when two families married, they could choose to have their coats of arms mixed (compounded). Compounded arms varied and could range from a basic half-and-half ensemble to including a tiny version in one corner of the other. Symbols were sometimes added to indicate the offspring of a holder of arms, such as a white line through the shield to indicate a first son who had the same coat of arms as his father. Similarly, a coat of arms might include an additional symbol to signify that the bearer was an illegitimate son of the original bearer of the arms.

How were coats of arms used?

Coats of arms could be displayed on other accessories of warfare such as on the front and back of surcoats (a long sleeveless gown fastened at the waist and worn over armor), pennons (triangular lance flags), horse coverings, banners, and hung beneath the trumpets of heralds. Some knights even had their arms engraved on their armor! However, this was very expensive and a rare sight. 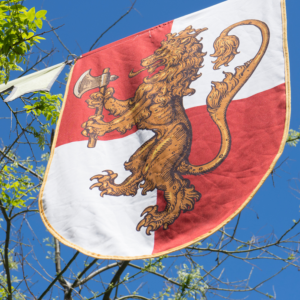 See why a banner is ideal for displaying your coat of arms.

Coats of arms were not only utilized in combat, though. They were an excellent method to distinguish rivals in medieval tournaments and knights frequently had to display their coat of arms outside the hostel where they were staying during the event. You may have seen this in a movie or TV show featuring a medieval tournament (such as the highly popular Game of Thrones or A Knight’s Tale). This tradition expanded and the idea of a permanent inn sign took hold, which is proven by the names of some of the oldest pubs in England, such as the Red Lion, Rose and Crown, Black Swan, and White Horse, all featuring classic heraldic symbols on their signs.

The shield shape was changed as real shield designs evolved over time. Also, coats of arms designs grew increasingly extravagant, and the shields more ornate. The classic kite-shaped shield, while perhaps a little bigger, remains the favorite of heralds even today.

Coats of arms were further developed as heraldry advanced, and it became more important to display family lineage or heritage than to identify oneself on the battlefield. In heraldic language, these additions are referred to as achievements. Rather than just the shield shape, coats of arms evolved to include supporters on either side holding the shield (lions, unicorns, knights, etc.). The image of the coat of arms of James VI from 1603 makes a perfect illustration of this. The shield might also be topped with a crested helmet and even a crown in royal cases. Scrollwork such as complex leaf arrangements surrounding the shield and a motto may have been added below that sums up a family saying or recalls a momentous occurrence in their history.

Heraldry has survived and still thrives today, of course.. you can see it everywhere! The use has expanded from the individual to groups with clubs, sports teams, and 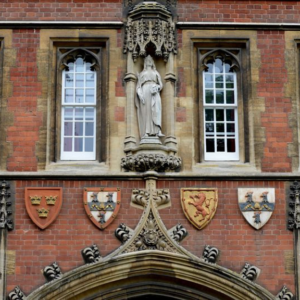 even corporations all building their own badges of distinction. Coats of arms can be seen in a variety of locations, especially those that convey clear visual messages and promote quality and history such as military uniforms, banknotes, fine porcelain, and war memorials.

Some of the best family name histories are formed with the details gleaned from the coat of arms. By uncovering the social status and the geographic location of your ancestors, you can begin to get a sense of where you come from and who you are.

See the Banner Set featuring your Family Coat of Arms: a beautiful way to display your family pride. 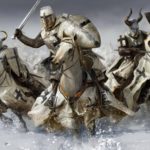 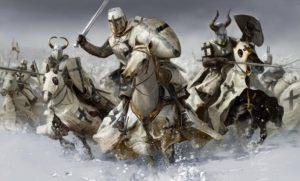 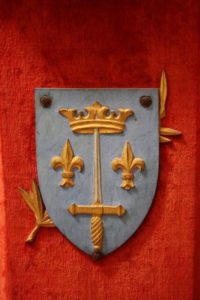